It is 5:30 p.m. You’ve just walked in the door with four grocery bags and two hungry children…at dinnertime. You hand each child a tiny snack, look at tonight’s menu, realize it’s not possible…and yet less than half an hour later you have a tasty meal on the table that your children actually eat and like.

That was me, tonight, thanks to eMeals. I’ve attempted (and failed at) meal planning in the past, having an approach much like the spontaneous Melanie in the Middle. Unfortunately, the pour-a-glass-of-wine-and-wing-it approach doesn’t work when my small children need dinner around 5:30 p.m. and I get home with them at 5:15.

Despite some posts that indicate the contrary, I don’t just throw frozen stuff into the microwave for them. First of all, they generally hate that stuff, even if it is organic and such. Second, I like to cook and want to make them (and us!) tasty meals.

Here’s a problem: I live in a wonderful neighborhood full of small children just the same ages as my children, and sometimes late in the afternoon, I’d rather my kids be outside playing with friends than indoors while I’m making dinner. Or we get home and see all their friends outside, across the street, and go over to play instead of going inside so I can cook dinner. It’s a trade-off, for sure, but I’d really rather they be outside, even if we end up in nightly dinner hell.

Anyway, I recently signed onto eMeals. eMeals is a meal-planning service that sends you a weekly menu, with recipes and shopping lists. The great thing about eMeals is they have several different meal plans: Classic, Clean Eating (what we do), Natural and Organic, Gluten Free, Paleo, Mediterranean, Simple Gourmet, Low Fat, and so on. You can also plug in the grocery store you normally shop at, and they can match a meal plan to the store. In addition, you can indicate whether you want meals for 1-2 people or 3-6 people. Our first week, I’d signed us up for 3-6 people. Way too much food for us (2 adults, 2 kids). This week, I’m shifting to the 1-2 person plan.

We get the Clean Eating meal plan. It’s sent to me on Wednesday, but I didn’t manage to print out the most recent one until the weekend. I spent a little time going over it. The plan includes seven meals plus side dishes. I knew we’d have leftovers one night and might want to use up a freezer meal another night. So I crossed off two meals that I thought my family would be less interested in.

Then I went through the included grocery list, crossing off any items that we already had or that we wouldn’t need (items for the meals I’d crossed off). The list and a pen went into some reusable grocery bags.

Could this get much easier?

However, being our spontaneous selves, we ended up going apple-picking instead of grocery shopping. You know how it goes!

Tuesday I picked up Max from school, zoomed over to the grocery store, got everything on the list, wove through traffic to go get Ben, and got home. Naturally, all the neighbor kids were outside, so outstayed we…until 5:30, when we finally got in the door.

Did I panic? Actually, for a second I did. Then I went to my menu. Tonight was supposed to be Juicy Chicken Sliders, with a side of Parmesan Oven Fries. “Kid-Friendly,” it was noted. But the total time: 50 minutes. Too long! Pot roast? Nope — that’s a slow-cooker meal. Roasted Chicken: a 50-minute cook time. Penne? I’m sick of pasta — last week we went off our plan a little, in an attempt to clean out the cupboards, and ate a lot of pasta.

One problem: It called for ground round. Our ground beef was all frozen. But I had just brought home chicken breasts for the sliders that we wouldn’t be having tonight! I scanned the recipe and decided to go for it.

Combine corn, tomatoes, jalapeño, garlic, cilantro, lime juice, salt, and pepper in a medium bowl; chill until ready to serve. (I also threw some leftover edamame into the corn salsa, because why not?)

To serve it, I put things in separate piles on the kids’ plates, because they are ages three and five, and sometimes it is best if things don’t touch each other. They ate the chicken and asked for more. Then Max noticed how my plate was one big mixed-up salad, and he wanted his that way. So of course then Ben wanted his that way, too. So we all ended up with these big mixed-up taco salads on our plates, and Max loved it. Ben preferred to fly his alien spaceship tomato-and-cucumber combo. But he did eat all his chicken and some of the corn salsa.

Remember those grocery bags at 5:30? Yeah. I could have been done with dinner even sooner, but I decided to slice up some cucumbers and tomatoes, too. And clear the breakfast dishes off the table because….you know.

My plate. Blurry but tasty.

What’s awesome is that we had a great new meal (I never make taco salad!!) on the table fast, and we all enjoyed it. Plus, thanks to the grocery list and the quick shopping trip, I now have the ingredients in my fridge for the rest of this week’s meals, and now I know how long the others will take, so I can plan those nights.

Want to try it? Here’s a discount code for 15% off DINNER15. Considering that the plan is pretty inexpensive even without the code, and the grocery savings are nice, and the knowing what’s for dinner is priceless, the extra 15% off is icing on the cake! Click the link (image) below to sign up! 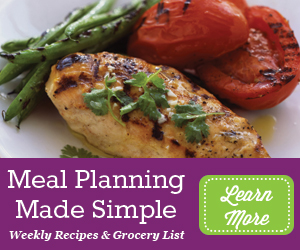 Disclosure: I am a member of the eMeals blogger network program and am also in the eMeals affiliate program. I was not compensated for this post, and all opinions are mine.